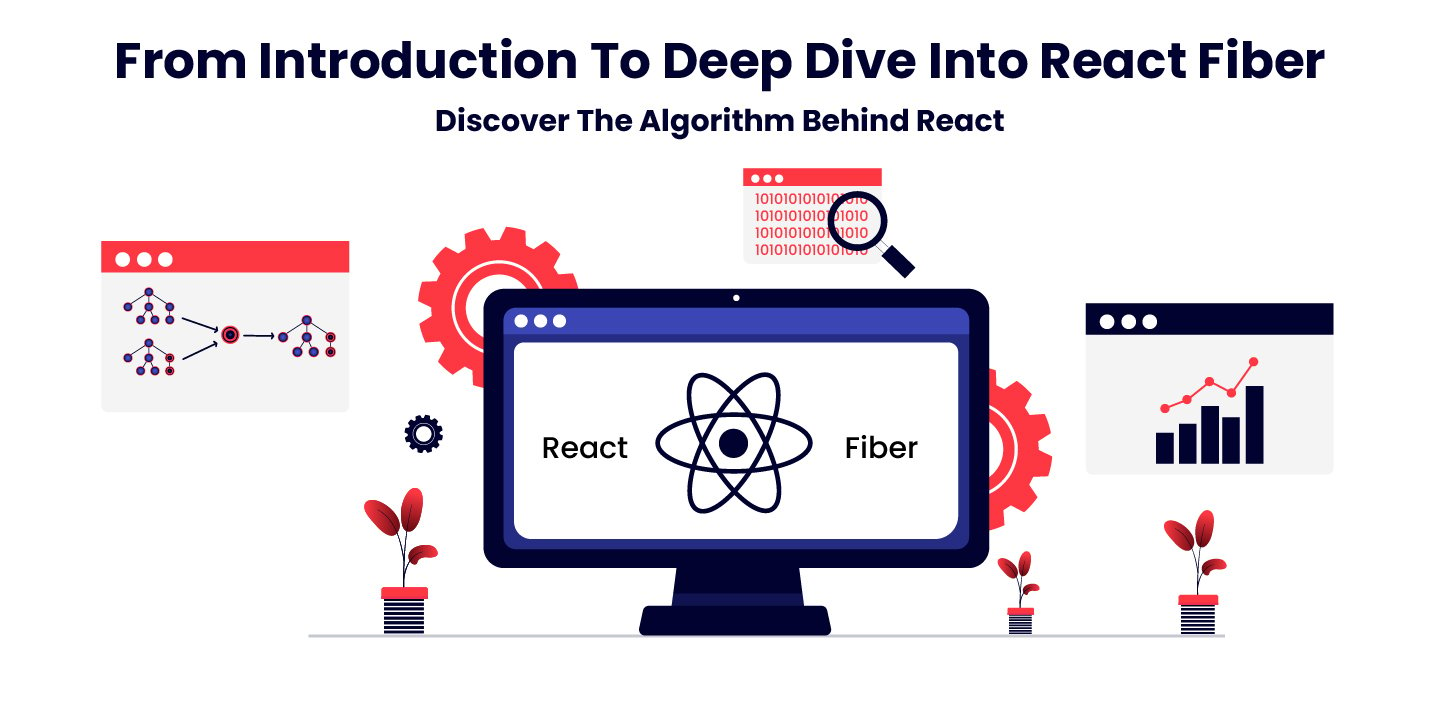 From Introduction To Deep Dive Into React Fiber Algorithm

React has gained huge fame in IT and other industries. Still, Facebook introduced a new version of React v16.0 a.k.a “React Fiber”. Why? Are you also wondering when React was already performing great, then why Fiber? To clear all the chaos and explain React Fiber algorithm in-depth, we will start From Introduction to Deep Dive Into Fiber.

In addition to completely rewriting the internals of React, Facebook hasn’t changed its public API. As a result, in the React version 16.0 release, an update to react core algorithm was introduced. “Fiber” is the name given to this new architecture. Presently, it’s famous as the React Fiber algorithm.

The React Fiber framework is a complete rewrite of the existing React core that is backward compatible. This is an old version of the React reconciler that is reimplemented.

Asynchronous rendering, Portals, Error Boundaries, and Fragments were also included in this release. In React, incremental render adds the ability to split rendering work into multiple chunks so that work can be performed in an incremental fashion. In simple terms, React Fiber is the new reconciliation algorithm. Basically, reconciliation is the process of comparing or differing old trees with a new tree to find what is changed or modified.

Here are some advantages of React Fiber. Must check below;

The purpose of React Fiber is to improve the performance of complex React applications by breaking the limitation of the call stack. It allows React to stop and start rendering work whenever needed.

3. Control Over The “Priority” Of Work

In React Fiber, developers are allowed to divide rendering work into smaller chunks. These chunks are later distributed over multiple frames. In this way, users can control the “priority” of their work.

React Fiber helps apps deliver a fluid experience via breaking up work into smaller chunks. Later,  these chunks can be paused, resumed, or aborted based on the priority order. The Fiber widget allows to fine-tune rendering so that the most common use-cases (or) the most important updates are computed at the earliest possible moment. It speeds up the rendering of components at start-up since the browser can acquire them before the entire bundle is downloaded.

In the original reconciliation algorithm, the processing of the component tree was done synchronously in a single pass, so the main thread was not available for other UI-related tasks like animation, layouts, and gesture handling. The React Fiber algorithm Reconciler has a number of goals including using chunks for interruptible work, prioritizing, rebasing, and reusing work in progress, yielding between child and parent to support React layout, and returning multiple elements from render().

Reconciliation is the process of comparing two DOM trees. In the first rendering of the UI, React builds a tree of nodes, each representing a React element. Once the virtual tree is created, it operates in the same way as the rendered DOM tree. The UI updates recursively every time a tree node is compared in two trees. After that, the renderer receives a list of cumulative changes.

Scheduling helps to prioritize tasks based on importance.  Recursive traversal and rendering of the whole updated tree are called single flow in the old stack reconciler implementation which causes frame drops.

Time-based or priority-based schedulability is possible with React fiber. Updates must be fixed according to the time or deadline, and high-priority so that priority is given to the right task instead of low-priority work.

When the callback function is called, the argument deadline object passes in. The timeRemaining function returns the idle time remaining. If this time exceeds zero, perform the necessary work. In case the work is not completed, schedule it for the next frame at the last line.

The React Fiber algorithm (lowercase ‘f’) is a simple JavaScript object that represents React elements or nodes in the DOM tree. Fibers are the reconcilers that help show the values of React Fibers in the React component.

A simple component that shows items from a data list we have generated from the state of the component. The component also has a button and a span for displaying the number of items in the list. Fiber represents the React elements. The first time React renders, it goes through each of the React elements and builds a tree. This creates a fiber for an individual React element.

In contrast to trees, React Fiber creates a linked list of elements, each element being a fiber. We’ll see how the tree iterates and the finished structure in the next section. In React, the parent, child, and siblings are in a relationship. The return key points to the parent, where kids or fiber return upon completion of work.

How Does React Fiber Work?

In React, Fiber introduces different priorities for updates. Fiber divides computation into nodes, or units, of computation that it can commit at any time. With this feature, React can stop, resume, or resume computation for various components. 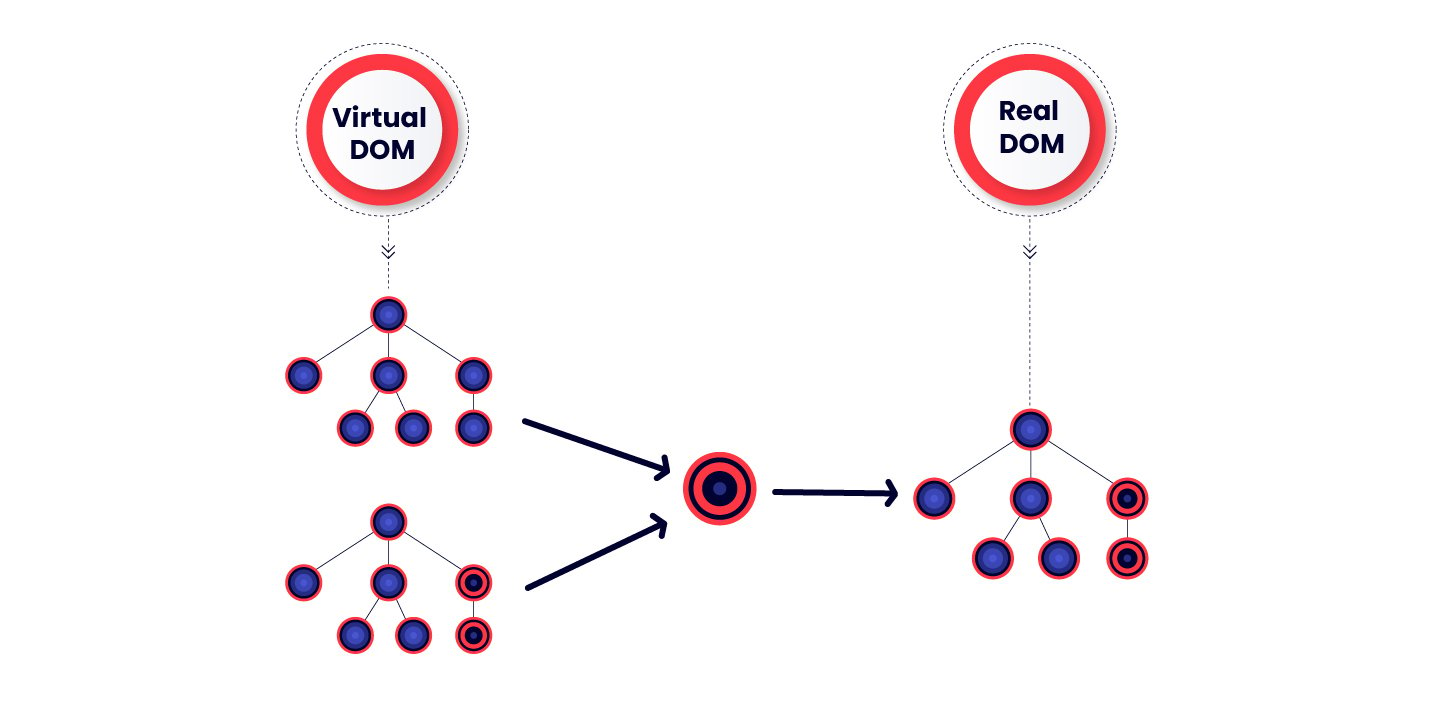 In Fiber, the reconciliation process and rendering to the DOM are separated into two phases:

In the first phase of React’s UI rendering, a list that incorporates all the new and updated components is generated (an ‘effect list’).

React schedules these changes to execute after the list is fully computed, in the next phase. However, React does not actually perform any changes.

In the second phase of React which is also known as the commit phase, the DOM is instructed to render the effect list that was created in the previous phase.

Conversely, the Commit phase cannot be interrupted by the Reconciliation phase.

React’s Fiber component traverses the component tree using a singly linked list tree traversal algorithm. It is now possible to either pause or resume the work at particular nodes in an “asynchronous” manner in this algorithm.

Here are some reasons behind the popularity of React Fiber. Check some steps below;

In contrast to JavaScript, where coding can quickly become complex, React makes it easier to create dynamic web applications because it requires less coding. This is why nowadays every software development company is hunting for React developers.

In addition to making web applications faster, React uses Virtual DOM, which compares previous states of components and updates only those items in the Real DOM that changed, rather than updating them all over again as in conventional web applications.

The components in a React application are its building blocks, and individual apps contain multiple components. Logic & Control are built into these components, then the entire way is re-used through an application. This drastically reduces the development time.

The data flow in React apps is unidirectional, which means that developers nest child components inside parent components. Since the data flows in a single direction, it becomes easier to troubleshoot errors and determine where a malfunction occurs in an application at any given time.

Despite React’s easy learning model, it is important to invest some time to get a good understanding of the library’s functions and protocols. As with other tools and frameworks, the library can be intimidating at first.

6. Used For The Development of Both Web and Mobile Apps

React has already proven to be useful for developing web applications, but it’s not the only thing it can do. React is highly popular for both web and mobile app development.

React is a renowned technology as it caters to brilliant features. In addition, React Fiber brings many additional advantages to the plate that’s why most of the companies are looking to hire React developers. In case you have either missed or are unaware of the React Fiber algorithm, then consider this blog.

Consequently, fiber is in the limelight worldwide for rendering such incredible and simple features. Somehow if you are either new to React or React Fiber, then don’t forget to have a look at this blog. We have elaborated React Fiber from introduction to in-depth detail.